Melina Alferoff is an outstanding honor roll student at Parks Middle School.  Melina is bilingual and she speaks French and English fluently.  Melina also comprehends the language of Mina, which is spoken in Togo, Africa. Melina was born in Creiteil, France.  She lived in France for 10 years.  Her family left France and settled in Georgia.  After relocating to Georgia, Melina attended Capitol View Elementary School in the 5th grade.  Melina was an ESOL student at Capitol View and she learned to speak, write, and understand English during that time.  Melina tested out of ESOL at the end of her 6th grade school year. Melina became a part of the gifted program in 6th grade at Parks Middle School.  She is now 12 years old and a 7th grader at Parks Middle School where she excels in all of her classes.   Melina was recognized for having a 100 GPA and being on the Principal’s List.

Melina is a member of the Morning Announcement Team where she greets the students in French.  Melina was also selected to participate in the Duke University 7th Grade Talent Search.  She is also a member of Breakthrough Atlanta.  Melina’s future aspiration is to become a Renewable Energy Engineer.  Melina’s favorite subject is Social Studies.   In her spare time, Melina enjoys reading, writing, drawing, exercising, and talking to friends.  Melina was selected as the 2012-2013 Youth of the Year by the Pittsburgh Community Improvement Association.  Melina was also chosen as one of the Heroes of the Month for the month of September.   She is truly an APS student that represents her community and school.

On Saturday morning, January 26, while many people will still be nestled in their beds, Jamariel Hobbs will be immersed in one of the most angst-producing evaluations imaginable to teenagers—the SAT.  The looming test-date, however, does not intimidate Jamariel; he welcomes the challenge.  After all, last October the 11th grader received the highest PSAT score at Douglass, and he has held the highest GPA in his class since ninth-grade.

Sabrina Hobbs, Jamariel’s mother, says, “I always tell my children that education is very important.”  Hobbs also reminds them that they cannot take their education for granted, because African-Americans did not always have access to school.  “We take education very seriously, and everyone around here knows what I expect,” she says.

Hobbs’ words have not fallen on deaf ears.  Jamariel, elected by his peers as Douglass’s junior class president, is a straight A student, a finalist for the Governor’s Honor Program and very active with the school’s Student Government Association.

“I strive for excellence in everything ,” says Jamariel.  But the 11th grader explains that this goal is about far more than making good grades.

For starters, Jamariel believes that striving for excellence sets a good example for his younger brothers, whom he hopes will follow his lead.  He also believes that anything short of excellence will delay his pursuit of a career in pediatric neurosurgery. Jamariel admits, however, that the real motivation behind his commitment to excellence is his mother.

He says he has watched her struggle and make incredible sacrifices for their family, and he looks forward to the day when he can give back to her.

“I work hard now, so she won’t have to later,” says Jamariel.

He successfully balances academics and an active social life, and outside of the classroom he is a typical teenager.  He participates in the school’s drama club and ran cross-country in ninth and tenth grades.  And he admits that his favorite pastimes are reading, eating, hanging out with friends and playing video games.

As he looks to the future, Jamariel says he plans to apply for admission to Emory University, Johns Hopkins, and Morehouse College.  And on Saturday morning, January 26, the aspiring life-saver will take a huge first step toward charting the course for his future.

Lachey Benson’s teacher describes her as a class scholar who is always willing and ready to help her fellow classmates. Lachey posseses a certain zeal and excitement to take on any task she is asked to do, which is probably why she is a member of the Challenge Program. Taking on challenges and difficult tasks is definitely Lachey’s forte.

Recently, Lachey was selected to speak at Bethune’s Daughters Day luncheon, where she eloquently spoke in front of students, teachers, and guests.

Lachey’s favorite subject is math, and she especially enjoys  addition, subtraction, multiplication and measurement.  In addition to spending time with her family, Lachey also loves to stay active on the playground. But, more than anything, she loves to meet new people.

Lachey aspires to one day become a dancer, but she is also interested in being a teacher or an artist. It is fair to say her options are limitless.

But for now, Lachey is focused on doing well in school as she hopes to work hard enough to one day skip a grade! 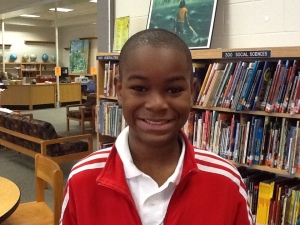 Tyrese Miller is an energetic 4th grader with a heart of gold. He stands out as a student who is eager to help others around him. He enjoys assisting his Principal and practices best behavior in the classroom. “Tyrese is a kid who just makes you smile. Not only is he eager to learn and do his best, but he also has a personality that radiates enthusiasm,” says Principal Rebecca Pruitt.

Tyrese believes it is important to listen to people, and to help people even when no one is watching. He cares for people through acts of service, but he also loves relating with friends and helping them resolve conflicts. His genuine care and attention compels people to open up to him, and he loves sharing words of encouragement with them. Tyrese says, “I think people should be nice to everyone even if you don’t like them. Everyone is different, and they might want you to know something but they might not have a chance to tell you, so I like talking and listening to others.”

Tyrese tries his best at everything, and his goal is to improve reading skills this year. “Reading involves everything and you need to read for knowledge,” Tyrese says.  When Tyrese grows up, he wants to become a car designer. He is in the early stages of sketching cars, and loves to help his mom wash her car. His favorite subject is math because he enjoys solving problems, and his hobbies include basketball, foursquare, and hanging out with friends.

Are you in need of a meal this summer? Our new partner @imafatherf1rst is offering the Meals of Love program benefiting APS families! The program currently delivers 1,400 meals a day to over 130 families from the Westside of Atlanta. Learn how you can receive a meal by visiting www.imafatherf1rst.org! For the complete list of APS food distribution partners, please visit our coronavirus webpage! (Link in bio)
Update: Thank you everyone for sharing! Kiteja has been found! Please help us find APS student Kiteja Watson! She has been missing since Saturday, May 30, 2020. She lives in the Adair Park neighborhood in Atlanta. If you or someone you know has seen Kiteja please contact the @atlantapolice immediately, or her mother, Ms. Elishia Kelley, at 404-547-8245.
Today, donations to @donorschoose projects posted during the coronavirus pandemic are doubled! 108 APS projects will be eligible for matched donations! Give today and help support our amazing students and teachers! www.donorschoose.org
Does your APS student need free wifi or a laptop? Thanks to the generous support of our partners, Get Our Kids Connected is closing the digital divide! Complete the intake form today in our bio!